A "Yes" vote approves, and a "No" vote rejects, a statute that:

Analysis by the Legislative Analyst

In June 2013, the Legislature passed AB 277, which approves gaming compacts between the state and the North Fork Rancheria of Mono Indians and the Wivot Tribe. Under the State Constitution, enacted legislation can generally be placed before voters as a referendum to determine whether it can go into effect. This proposition is a referendum on AB 277. If voters approve Proposition 48, the gaming compacts between the state and the two tribes would go into effect.

Federal Authorization. Indian tribes possess special status under federal law. Specifically, tribes have certain rights to govern themselves without interference from states. As a result, state regulation of tribal casinos and other activities is generally limited to what is authorized under (1) federal law and (2) federally approved agreements between tribes and a state. For example, federal law permits federally recognized tribes to operate casinos that offer certain types of games (such as slot machines) on Indian land in states that allow such games. The federal government generally defines Indian lands as reservation lands or lands held in trust by the U.S. for the benefit of an Indian tribe. However, federal law generally prohibits gaming on land that was obtained and put into trust for an Indian tribe after October 17, 1988. There arc some exceptions to this rule. For example, gaming on newly obtained land is allowed if the federal government determines that gaming on the land is in the best interest of the tribe and would not be harmful to the surrounding community. The Governor of the state where the land is located must formally agree with the federal government's decision.

When a tribe wants to offer gaming on its land, federal law requires that the state negotiate a contract (known as a "tribal-state compact") with the tribe that specifies how gaming will be conducted and regulated. This compact must be approved by the federal government.

State Authorization and Regulation. Proposition 1A, approved by California voters in 2000, amended the State Constitution to allow Indian tribes to offer slot machines, lottery games, and certain types of card games on Indian land. Under Proposition 1A, a tribe can open a casino that offers these games if (1) the Governor and the tribe reach agreement on a compact, (2) the Legislature approves the compact, and (3) the federal government approves the compact. To date, the Governor, Legislature, and federal government have approved compacts with 72 of the state's 109 federally recognized tribes. Currently, 58 tribes operate 59 casinos.

Compacts between the state and tribes specify how the state may regulate tribal casinos. For example, compacts typically allow state officials to visit casino facilities, inspect casino records, and verify that tribes are meeting the requirements of their compacts. In addition, the compacts generally require tribes to make certain payments to the state for specific purposes. These payments are primarily made to two state government funds:

The state recently negotiated compacts with two tribes. The compact with North Fork allows them to begin gaming in Madera County. The compact with Wiyot prevents gaming on their tribal land in Humboldt County, but allows the tribe to receive a portion of the revenue generated by North Fork's casino.

Governor and Legislature Approved Compacts. As required under federal law, the Governor negotiated and signed tribal-state compacts with (1) North Fork on August 31, 2012 and (2) Wiyot on March 20, 2013. Each compact would he in effect for 20 years -- until December 31, 2033. In June 2013, the Legislature passed AB 277, which approves both compacts as well as various memoranda of understanding (MOUs) between North Fork and the state and local governments. The Governor signed the bill in July 2013.

Federal Government Approved Compacts. Upon approval of AB 277, the federal government issued final approval of the North Fork compact on October 22, 2013 and the Wiyot compact on September 6, 2013.

Compacts and MOUs Put on Hold by Referendum. Assembly Bill 277 would have taken effect on January 1, 2014. However, because of this proposition, a referendum on AB 277, the bill was put "on hold" prior to becoming effective. If voters approve Proposition 48, the gaming compacts between the state and the two tribes would go into effect.

If approved, this proposition would allow AB 277, the tribal-state compacts with North Fork and Wiyot and the MOUs between the tribe and various governmental agencies, to go into effect. This would allow North Fork to move forward with the construction and operation of a new casino. Wiyot would also be prohibited from conducting gaming on their tribal lands. Additionally, any state or local governmental agency that assists in the construction of the North Fork casino (such as through the construction of a road to the casino) would be exempt from certain state environmental regulations.

If this proposition is rejected by voters, North Fork would not be able to move forward with the construction and operation of a new casino unless a new compact was approved by the state and federal governments. Wiyot would be free to negotiate a new compact with the state for gaming activities on its tribal lands.

Below, we discuss the major provisions of the specific compacts and the related IV IOUs. 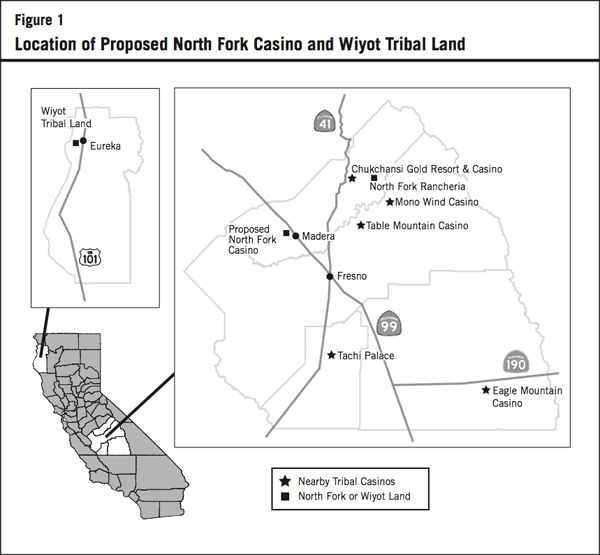 The North Fork Rancheria of Mono Indians negotiated and signed memorandum of understanding (MOUs) with three local governmental entities. These MOUs require the tribe to make payments after construction of the casino to (1) offset potential impacts from the casino on the community (such as increased costs for additional law enforcement or for transportation improvements) and (2) support various services or programs (such as the maintenance of parks or job training programs). These agreements are with:


In addition, the North Fork compact requires the tribe to either (1) make annual payments to other local governments within 25 miles of the North Fork casino that are negatively impacted or (2) deposit these funds into the Revenue Sharing Trust Fund, North Fork estimates that these payments would average about $3.5 million a year over the life of the compact.

Wiyot Tribe May Not Build a Casino. Wiyot owns land near the Humboldt Bay National Wildlife Refuge. The state expressed concern in the Wiyot compact that a casino on this land would have a negative environmental impact. Accordingly, the compact prohibits gaming activities on the tribe's land. In exchange, Wiyot would receive 2.5 percent to 3.5 percent of annual slot machine net revenue from the North Fork casino. (The actual percentage would depend on the amount of slot machine net revenue created by the casino.) North Fork estimates that it would pay Wiyot on average around $6 million annually over the 20 years of the compact. The Wiyot compact also includes various administrative and legal provisions related to payments made to the tribe.

Payments to Local Governments. The compact and the associated MOUs require North Fork to make one-time and annual payments to local governments in the Madera County area to offset potential impacts of the casino on the local community. (For more detailed information regarding these payments, please see the nearby box.)

Payments to Other Tribes. As discussed above, the North Fork compact specifies that Wiyot would receive a portion of North Fork's net slot machine revenue. In addition, in recognition of a potential economic impact of the new casino upon the nearby Chukchansi Gold Resort and Casino, the compact requires (1) payments to the Picayune Rancheria of the Chukchansi Indians through June 30, 2020 (estimated by North Fork to total around $25 million), and (2) North Fork to delay the opening of any hotel at the casino until after July 1, 2018. However, North Fork would only have to comply with these requirements if Chukchansi does not challenge (such as through lobbying or through the courts) North Fork's ability to open a casino on the proposed site. Given that Chukchansi has challenged the compact in various ways, it appears that these requirements will not apply.

Other Requirements. The North Fork compact includes numerous requirements concerning casino operations. For example, there are requirements for licensing employees and suppliers, testing gaming devices, and having programs that help individuals gamble responsibly. In addition, the compact allows the tribe to take one of two actions if the state authorizes non-tribal entities to operate slot machines. Specifically, the tribe could (1) stop gaming and making the specific payments discussed above or (2) continue gaming and negotiate reduced payments.

The fiscal effects of the compacts and associated MOUs on the state and local governments would depend on several factors, including:

As described earlier, North Fork would make various payments to the state and specified local governments. These revenues generally would be used to address costs related to the operation of the new casino in Madera County.

State Impacts. Under the North Fork compact, the tribe would make annual payments into the SDF that are expected to cover its share of actual state regulatory, problem gambling, and other costs. In addition, North Fork would pay Caltrans for any transportation-related services provided under agreement with the tribe, These payments would average about $1.5 million annually over the life of the compact.

Local Government Impacts. After adjusting for inflation, we estimate that Madera County and the City of Madera would likely receive between $16 million and $35 million in one-time payments from North Fork for specified services. Similarly, Madera County, the City of Madera, and the Madera Irrigation District would receive about $5 million in annual payments once the casino opens through the end of the compact. In addition, other local governments could receive $3.5 million annually over the life of the compact.

Impact on Revenues. The spending on gaming at a new casino generally comes at the expense of: (1) other spending on gaming (for example, at nearby casinos or cardrooms or on the state lottery) or (2) other discretionary sources of spending (such as on movies and eating out). These shifts in spending can result in reduced revenues received by the state and local governments.

Nothing recent!
Say something!

Copyrights © 2013-2020 & All Rights Reserved by PropZero.com
Privacy Policy/Terms of Service/Contact Us